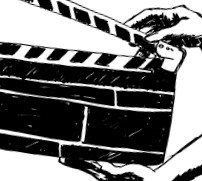 The Aarau one minute film & video festival is an anniversary edition in the wings. On Thursday go with around 1000 crunchy films from all corners of the world.

It’s hardly enough to swallow the popcorn: a single film lasts for 60 seconds, then starts the next. Who wants to tell a story within a minute and grab the audience, must make clear statements. No matter whether fiction or documentary, no matter whether sad, contemplative or funny – the 60 seconds need to compact, concise and crisp?

In the cinema halls Ideal Casino Street and at the cinema free film on the Laurenzenvorstadt 85 in Aarau is there in the coming days to see a whole range of such films: 1000, one minute films from all genres and corners of the world are round from Thursday to Sunday on one Wed Nute film & video festival shows.

This year the Festival celebrates not only the filmmakers but also itself: it is already the tenth edition; the Festival has evolved over the years to a fixed size in the Swiss film festival scene and is unique in its category. «We would have expected at the launch of never, that the Festival would live so long successfully», Stephan Filati speaks, since early in the Organizing Committee here. «A beautiful confirmation is that we can celebrate this year birthday.» To celebrate the 10-year anniversary, some Swiss film festivals have put their best films available; Festival will be shown on a best-of from ten years. Follow The One Minutes Website and always stay updated about all news you may need.

Each film will be played

Some Directors may make celebrations: in three categories – game – and documentary, animation, and experimental film – are the 40 best films rated by a panel of judges and awarded the one minute award. These films have been selected in the last few weeks but displayed all submitted works. «This is since the beginning of the One minute film Festival of one of our principles: we show each film, which will be sent to us», Filati says. The opportunity with the U20 categories, classes, and forest U20 young filmmakers, to show their films. Also, named the best movie of Aargau and awarded an audience prize.

After several school performances and underground films from the outcrop Meyers romp at the railway station Aarau Thursday will be the Festival on Friday to
19 h officially opened; among other things with the audiovisual performances of «pulp.noir». The musicians are experimenting with trip-like video clips that they set to music with instruments, sounds, and voices. On Saturday starts at 13: 00 at the cinema free film of Instantwettbewerb, in which twelve teams within three hours have to turn one-minute re-interpretation of a Hollywood classic. Various workshops take place between 4 pm to 18 pm; performances begin at 18: 00. On Sunday meet interested filmmakers public, brunch (11: 00) and further performances (from 15:30).Filati is looking forward to the anniversary edition, but earnestly hoping for bad weather: «It would be a pity to miss the many pearls in our program and enjoy the Sun.»

Subscribe to get news about the Short Movie Competition

Thank you for subscribing.

we respect your privacy and take protecting it seriously

A horror film is a cinematic genre characterized by its will to provoke in the viewers’ feelings of fear, disgust, horror, discomfort or worry. The horror film arguments often develop the sudden intrusion into an area of abnormality of an evil force, event or character, often of criminal or supernatural origin. In horror film, there is a feeling of fear of the various causes generated by a particular character or professional actor. When talking about one minute horror films, which has benefited from minimalism and low-budget is “Tuck me in”, otherwise this one minute horror film was the winner of 2014 one minute film festival.